The show started with a Sasha Banks promo paying homage to the late Eddie Guerrero.  Banks talked about the progression of the Women’s Division and declared a match with Charlotte Flair inside Hell in a Cell.  Charlotte makes her way down to the ring to address Banks but is interrupted by Rusev.  Rusev tells them that he doesn’t care about their women’s revolution.  Rusev calling

Charlotte “black swan” was hilarious.
Mics are snatched, grabbed and Lana is dropped before Banks and Charlotte deliver a double drop kick to Rusev.
Reigns shows up to even the playing field resulting in Rusev and Lana heading backstage.  It was a decent opening to the show.

The first match pitted The New Day’s Kofi Kingston vs Cesaro.   The New Day delivered their usual comedic promo calling Sheamus haute garbage…basura…basura…basura.  Sheamus and Cesaro will receive an opportunity to face The New Day for the WWE World Tag-Team Championship.  Due to the distraction of Sheamus, Kofi got the rollup pin on Cesaro.  The Sheamus and Cesaro dysfunctionality is being played well and could be the creative ruse that gives us the shocking title change.

Bayley’s match against the jobber lady was a good way to continue her development.  Dana Brooke interrupting Bayley’s victory celebration was expected.  It is interesting to see whether Bayley gets a match against Brooke at Hell in a Cell.  I actually like the prospect of a Bayley v. Brooke match.

The cruiserweight tag-team match was okay. 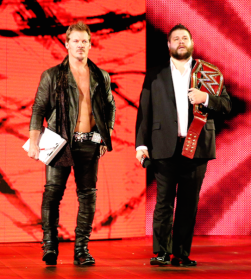 Stephanie McMahon said that Hell in a Cell is going to blow No Mercy away…the WWE fans will be the judge of that.  Mick Foley made HIAC announcements that include the Women’s Championship match inside Hell in a Cell as well as Seth Rollins v. Universal Champion Kevin Owens.  Owens and Jericho interrupt Foley.  Owens shared his displeasure of the HIAC match with Rollins.  Jericho pontificates and places Foley on the list…again.  I like the duo of Owens and Jericho, it is interesting how Stephanie made the play of giving Jericho a shot at the Universal Championship at HIAC with the stipulation  of beating Rollins at the RAW main event match.

Bo Dallas and Curtis Axel against Enzo Amore and Big Cass tag match was interrupted by The Club.  The Club laid waste to Enzo and Cass quickly.

I felt cheated out of a good deal.  Anderson and Gallows new rivalry against the “realist guys in the room” might be the push Enzo and Cass need.  Curtis Axel demanded a  match got a match against Sami Zayn and Neville.  It was a quick win for Zayn and Neville.

R-Truth vs. Titus O’Neil was another embarrassment for “The Titus Brand”.

Braun Strowman was in a two-on-one handicap match against Clay and Steven…The Splash Brothers.  Strowman did a double drop kick during the match and finished the match by slam dunking one Splash Bro on top of the other for the pin and win.  Strowman then sends another threat to Foley wanting better competition next week.  I agree that we need to see him take on a more

The mix-tag match of Reigns and Banks against Rusev and Charlotte.  I continue to question how Rusev’s punches hurt Reigns through the kevlar vest…the world may never know.  Reigns dominated the match early.  The match ends in a win for Banks and Reigns as Sasha forces Charlotte to tap out via The Bank Statement…Reigns played defense by leaping over the women to spear Rusev.  It was a good match.

The Tom Phillips segment with Chris Jericho and Kevin Owens was interesting.  “If one of us is champion then we’re both champion.”  The underlying feud is slowly developing between best friends.  Owens comment as to why he didn’t help Jericho last week, “One person stays healthy while the other takes a bullet,” sounds like some HIAC foreshadowing.

Paul Heyman addresses the fans about Bill Goldberg’s comment of wanting to facing Brock Lesnar during his ESPN interview.  This was the Heyman hype show to promote WWE2k17 and a Goldberg v. Lesnar rematch.  Goldberg won the first match.  Heyman issued the challenge on his client’s behalf.  I imagine Goldberg will accept the challenge.  My question, will this match be as good as the hype or will be as bad as the Lesnar v. Orton match at Battleground?

Booking my flight to answer that big mouth @HeymanHustle 's challenge next week in person on #MondayNightRaw #WhosNext? #seeyathere @WWE

Brian Kendrick was on commentary during the Tj Perkins vs. Ariya Daivari.  Prior to the match, Kendrick tried to sucker punch Perkins but Perkins got the upper hand.  Kendrick and Perkins will face each other for the Cruiserweight Championship at HIAC.  Perkins’ agility and sense of ring presence looks really good.  Perkins gets the win against Daivari with the Kneebar submission hold.

The main event, Seth Rollins vs. Chris Jericho.  Stephanie McMahon wishes Jericho luck and Jericho admits to wanting to write Stephanie’s name on the list.  Stephanie’s attempt to manipulate the friendship of Jericho and Owens is very clear.  The match between Jericho and Rollins was intense as Rollins executed very aggressive move sets.  Owens shows up to provide distraction for his best friend Jericho.  Jericho attempted to finish Rollins with The Walls of Jericho submission move; Rollins breaks the hold by grabbing the rope but Owens nails Rollins in the face.  A suicide dive to Owens followed by a flying knee to Jericho put Rollins in control of the match.  A Rollins top rope full body press miss turns into a Jericho Lionsault for the near fall.  Rollins ends up getting the roll up win.  An upset Owens assaults Rollins.  The episode ends with Rollins putting Jericho in the Pedigree as Owens looks on.

Each week, I keep waiting for that “swerve” ending to the show.  This is due to Triple H’s surprise appearance that gave Owens the title.  I like Owens and was very excited when he received the Universal Championship however; I’m not sure how much I like the direction the WWE is taking him.  I wanted Stephanie McMahon to stop talking about how much better Hell in a Cell will be compared to No Mercy and just create a pay-per-view card that does the talking for her.

About The Dusty Haize (45 Articles)

I am the greatest jobber of all-time. Welcome to the show Dust Bunnaize!

This work is licensed under a Creative Commons Attribution-NonCommercial-ShareAlike 4.0 International License.